Something seemed off to Lauren Pond on that warm day in a park near Jolo, West Virginia.

It was May 2012, and Pond, a freelance documentary photographer, was capturing images of Pastor Mack Wolford, a Pentecostal serpent handler, as he let a yellow timber rattlesnake slither around his body as he danced and preached.

The events of that day would change Pond’s life forever. A difficult journey from that experience would lead her to publish a book — Test of Faith: Signs, Serpents, Salvation — that offers an intimate photographic portrait of Wolford and his family.

And it also would lead, indirectly at least, to her job today with the American Religious Sounds Project, housed in the Center for the Study of Religion at The Ohio State University.

As a multimedia producer, Pond records and edits audio of religion as expressed in trucker chapels, political protests, Eastern Orthodox churches, Hindu temples, pagan festivals and other traditional and nontraditional faith communities. She continues to take photographs as well.

While her medium has expanded from imagery to include sound, her Ohio State work allows her to continue her focus on a subject that has always fascinated her: religion. “I’ve always wanted to understand what other people believed and why,” she said. 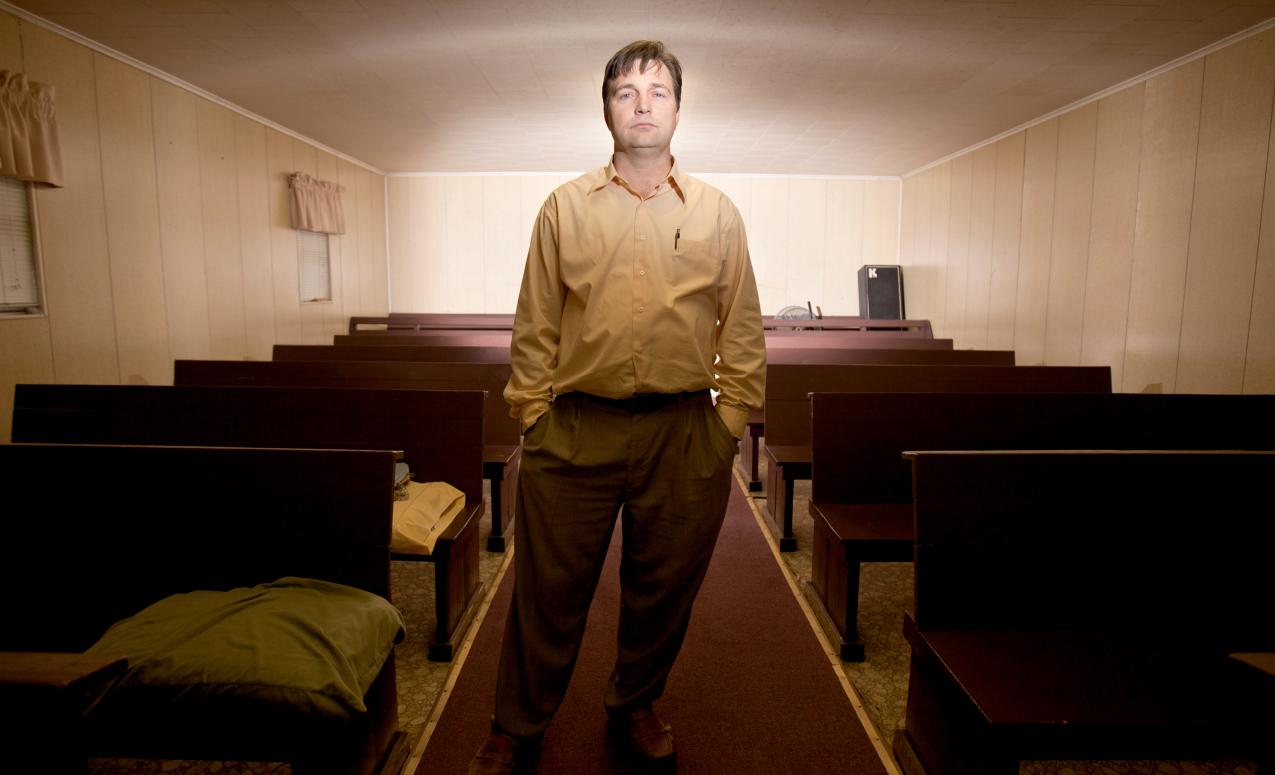 Pastor Mack Wolford at his church, the Full Gospel Apostolic House of the Lord Jesus, in Matoaka, West Virginia, in 2011. (Photograph by Lauren Pond) 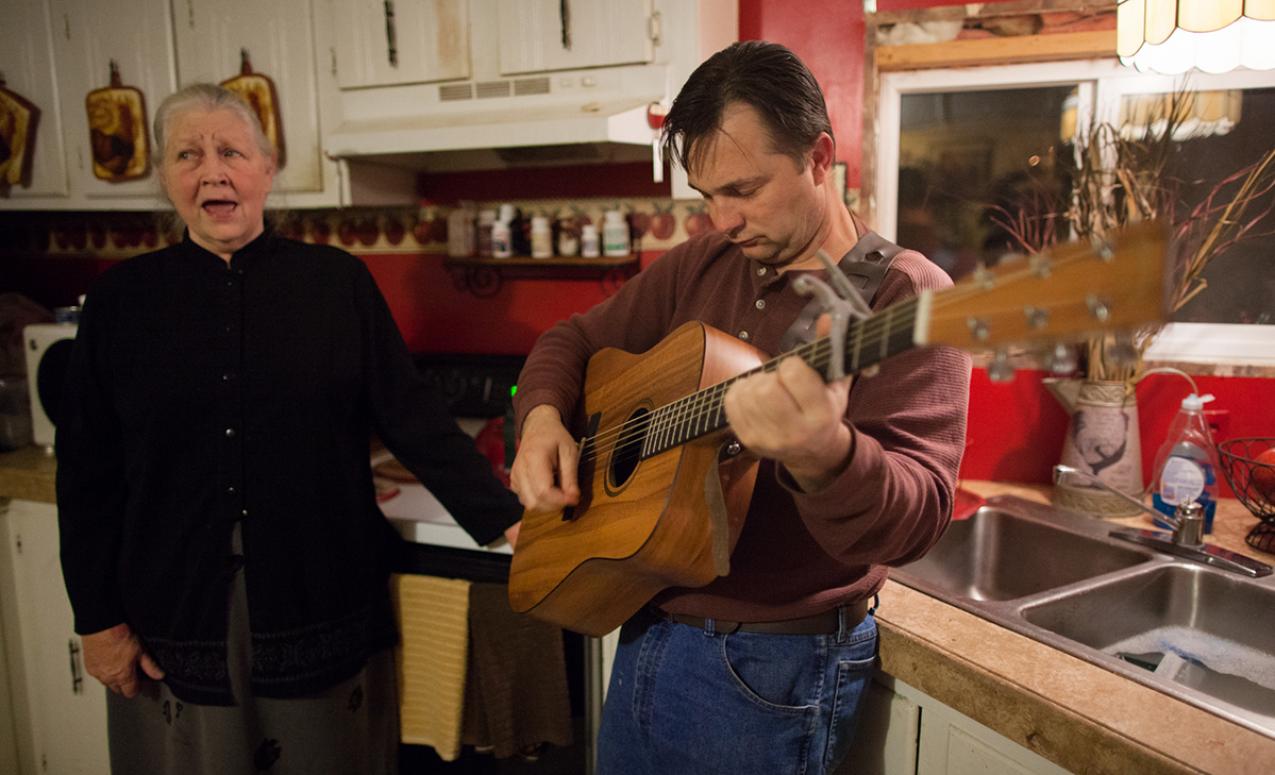 Wolford's mother, Vicie "Snook" Haywood, and the pastor at a Bible study at Haywood's house in Bluefield, West Virginia, in 2011. (Photograph by Lauren Pond) 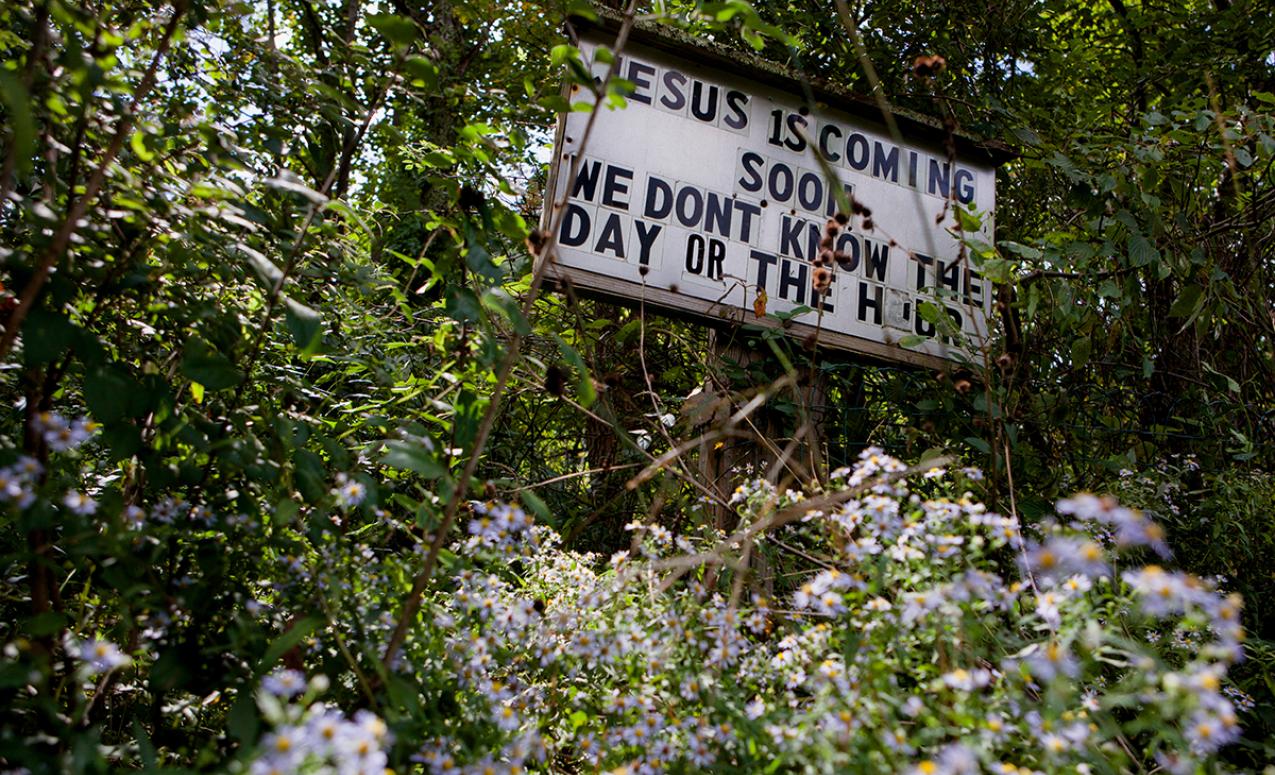 A sign outside Wolford's church in 2013 reads: "Jesus is coming soon. We don't know the day or the hour." (Photograph by Lauren Pond) 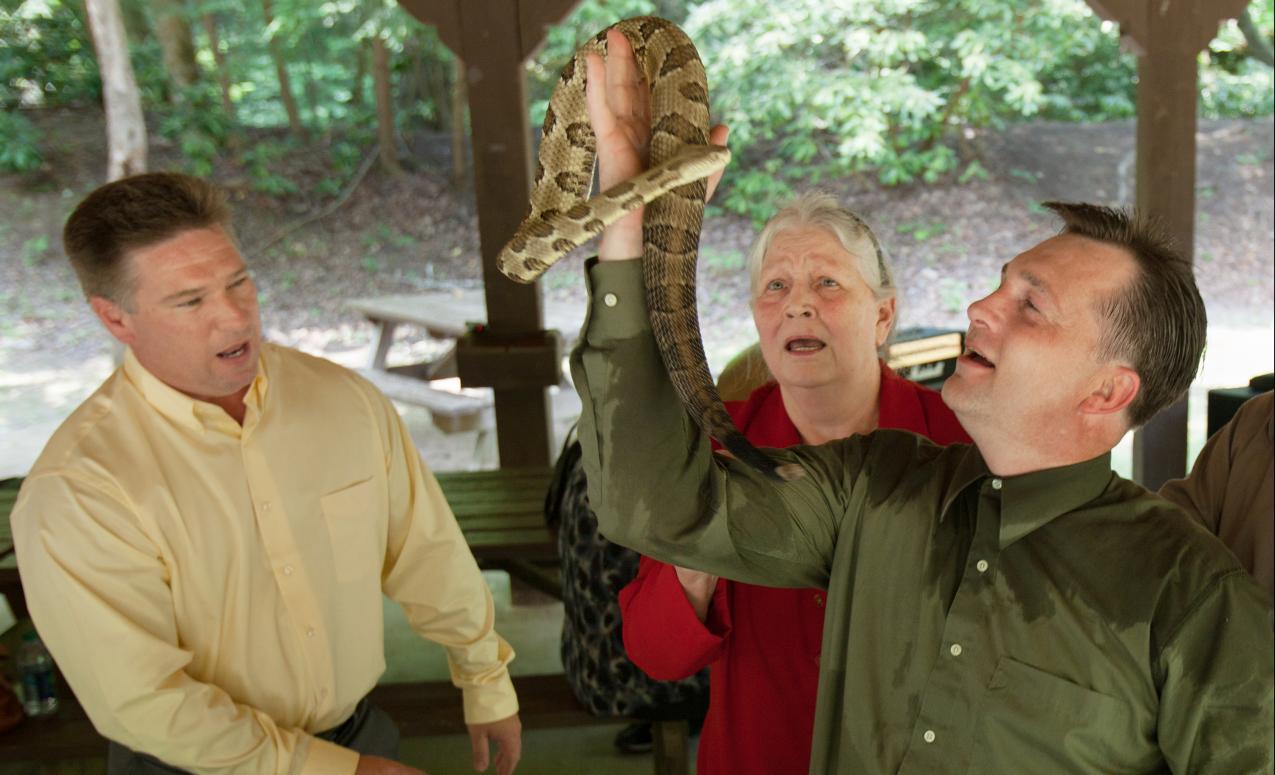 Wolford holds up Old Yeller, a yellow timber rattlesnake with which he preached, after he was bitten during a service in 2012. (Photograph by Lauren Pond) 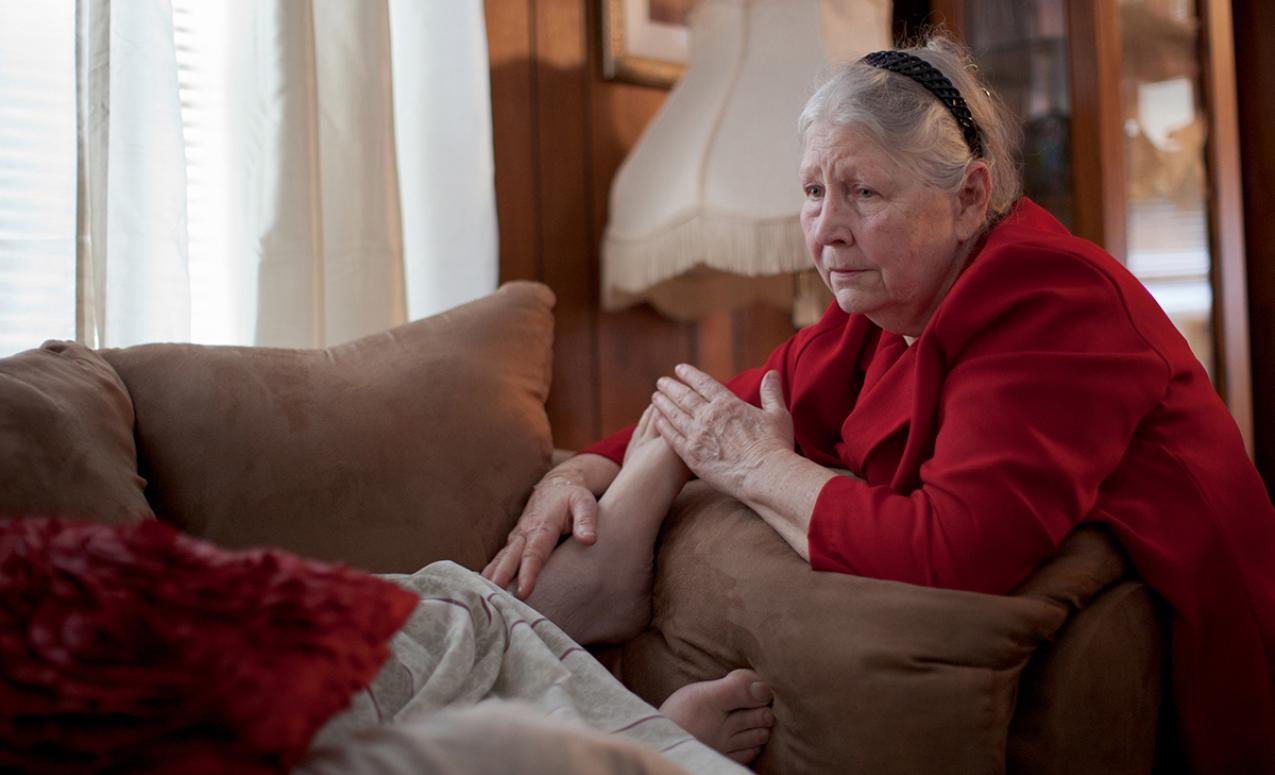 Haywood strokes her son's feet at a family member's home hours after he was bitten. He died later that day. (Photograph by Lauren Pond) 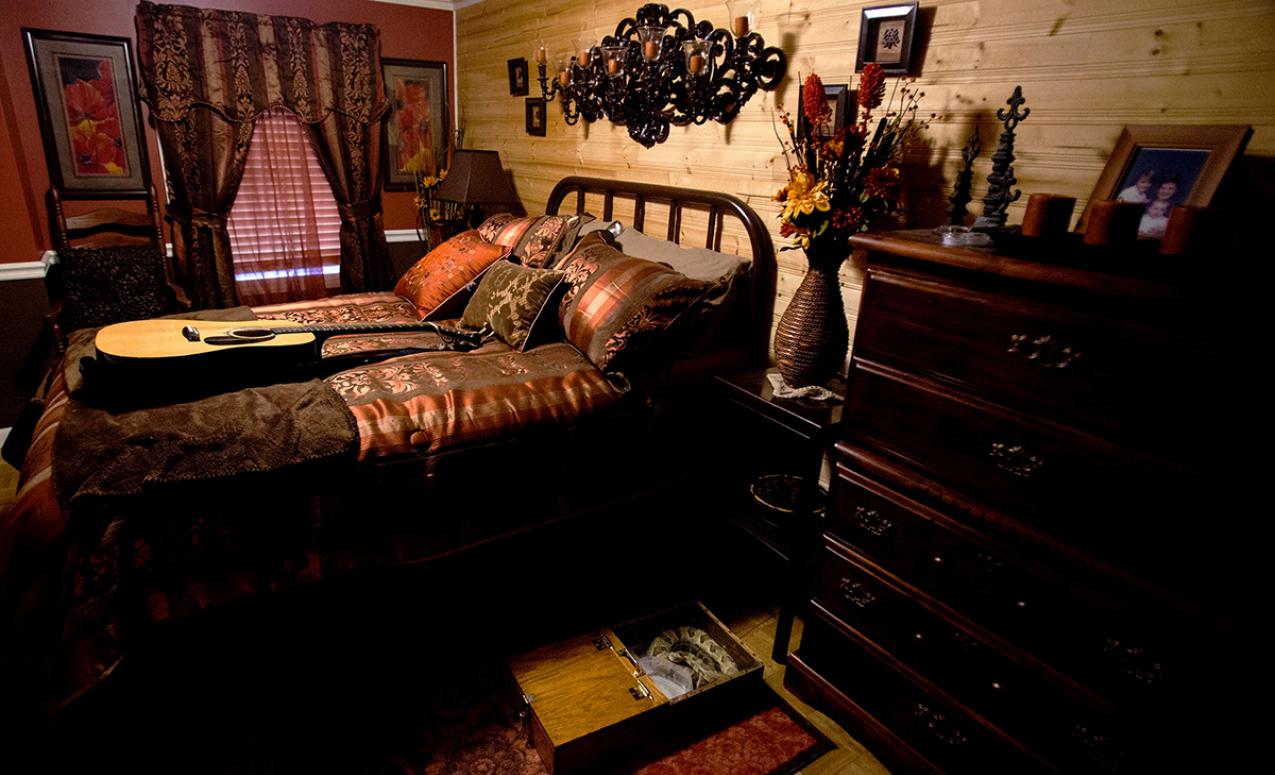 Old Yeller is coiled in a wooden box in Haywood's spare bedroom in Bluefield, West Virginia, in 2013. (Photograph by Lauren Pond) 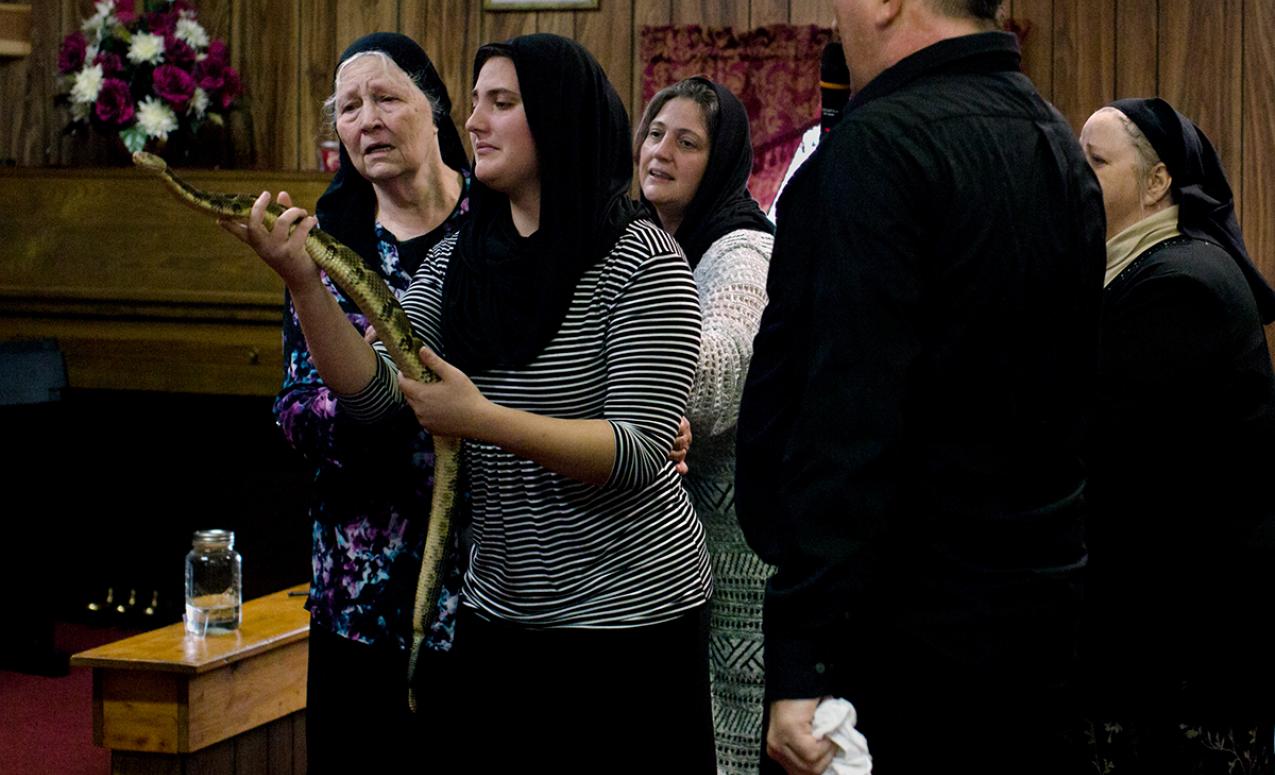 Haywood, Wolford's niece, Amber, and his sister, Robin, "take up serpents" during a service in Squire, West Virginia, in 2016. (Photograph by Lauren Pond)

A bite, betrayal and forgiveness

Pond met Wolford for the first time in May 2011. He was a member of a small Pentecostal Holiness denomination, the Signs Followers, that takes literally several verses in the Bible. These verses, Mark 16: 17-18, state that believers “shall take up serpents.”

Pond watched and photographed Wolford’s serpent handling service from a distance, amazed at what she saw. He had a look of joy and peace on his face the entire time, she recalled, and she was struck by the “electricity and benevolent energy” of the service.

“It was the very first time I had seen serpents handled, and I found myself mesmerized,” she said.

But at the service a year later, the feeling was much different. The service seemed rushed and lacked the warm energy Wolford previously exuded. That afternoon, while Pond was momentarily looking away, a quiet fell over the crowd.

“He got bit,” someone whispered to her.

After the initial shock passed, Pond continued to photograph Wolford as he became ill and had to sit down. He did not believe in seeking medical treatment for snakebites received during services. Like most serpent handlers, he thought it was up to God to decide whether he lived or died.

Later, Pond joined family members and Wolford at his mother-in-law’s house. Pond expected he would recover, as he had from previous bites. But he died later that night while she was there.

Shortly thereafter, wanting to counteract disrespectful and inaccurate media coverage of Wolford's death, Pond agreed to write a short essay for The Washington Post, to be published along with several of her photographs. But she made the mistake of agreeing to publish two images showing the pastor’s bare back, without understanding the impact this would have on his family.

Wolford’s wife had asked Pond not to photograph him without his shirt, which the family had removed when he was suffering at home from the snakebite. But Pond didn’t understand this request at the time. Signs Followers, and therefore Wolford, value modesty. After seeing these photos in a national publication, his family members were devastated by what they viewed as a betrayal of their trust.

“I had exposed his body to thousands of eyes, and had unwittingly caused his family enormous additional pain,” Pond said.

She was heartbroken and full of grief and guilt.

To her surprise, the family invited her to a memorial service to commemorate the one-year anniversary of Wolford’s death. Returning to see them, Pond was overwhelmed by the forgiveness that they showed to her.

“In some ways, I could not believe they would forgive me. I’m still very critical of what I did, but they have moved on and embraced me again,” Pond said.

The Wolford family’s forgiveness ultimately allowed Pond to understand the Signs Following faith more deeply and to document it in a more nuanced manner.

In 2016, she won the prestigious Duke Center for Documentary Studies/Honickman First Book Prize in Photography. With the blessing of the Wolfords, Test of Faith was published in November 2017 by Duke University Press. 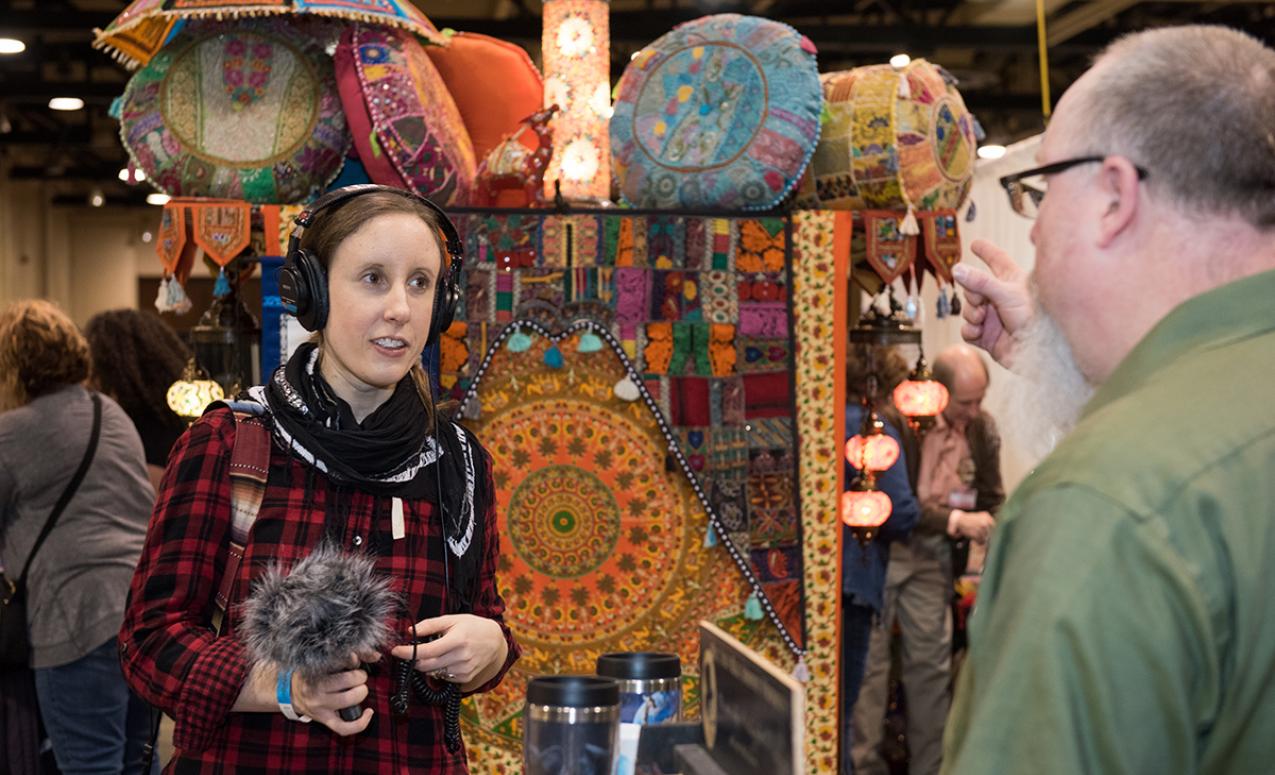 Today, Lauren Pond works at Ohio State as a multimedia producer with the American Religious Sounds Project, which offers resources for both researchers and the general public to understand the diversity of American religious life through its “sonic cultures.” (Photograph by Jo McCulty) 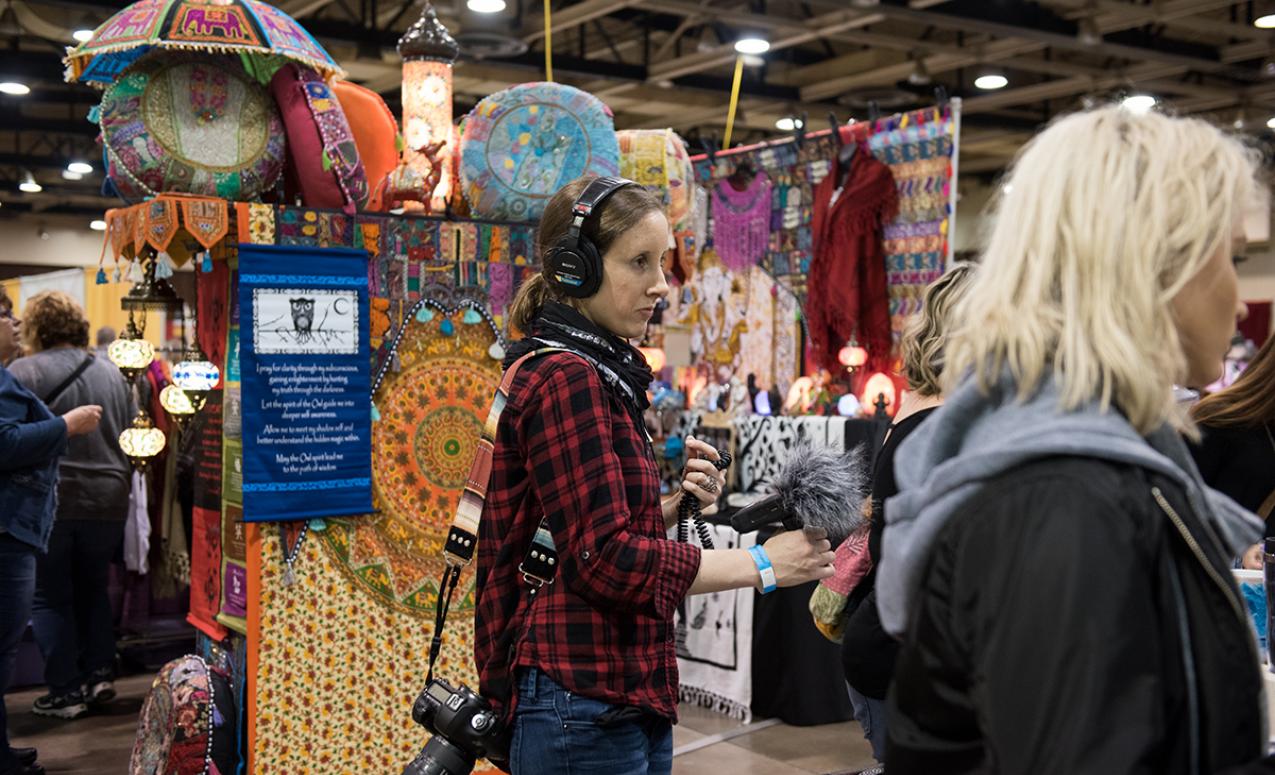 Pond records audio at the booth of the Magical Druid, a pagan spiritual resource center and store, during the Gift of Light Expo in Columbus, Ohio, in March 2018. “I like to put listeners into a space. Sound can transport you to a place in way that visuals don’t always do,” Pond said. (Photograph by Jo McCulty) 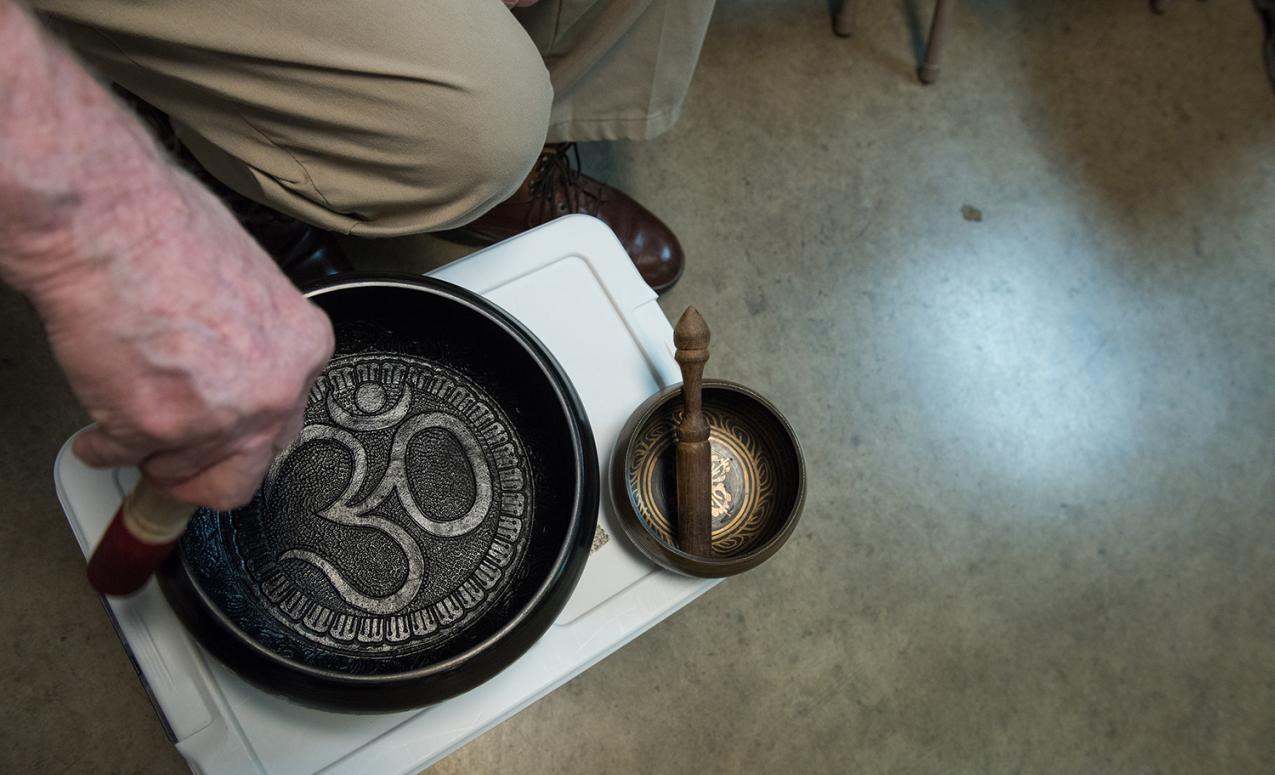 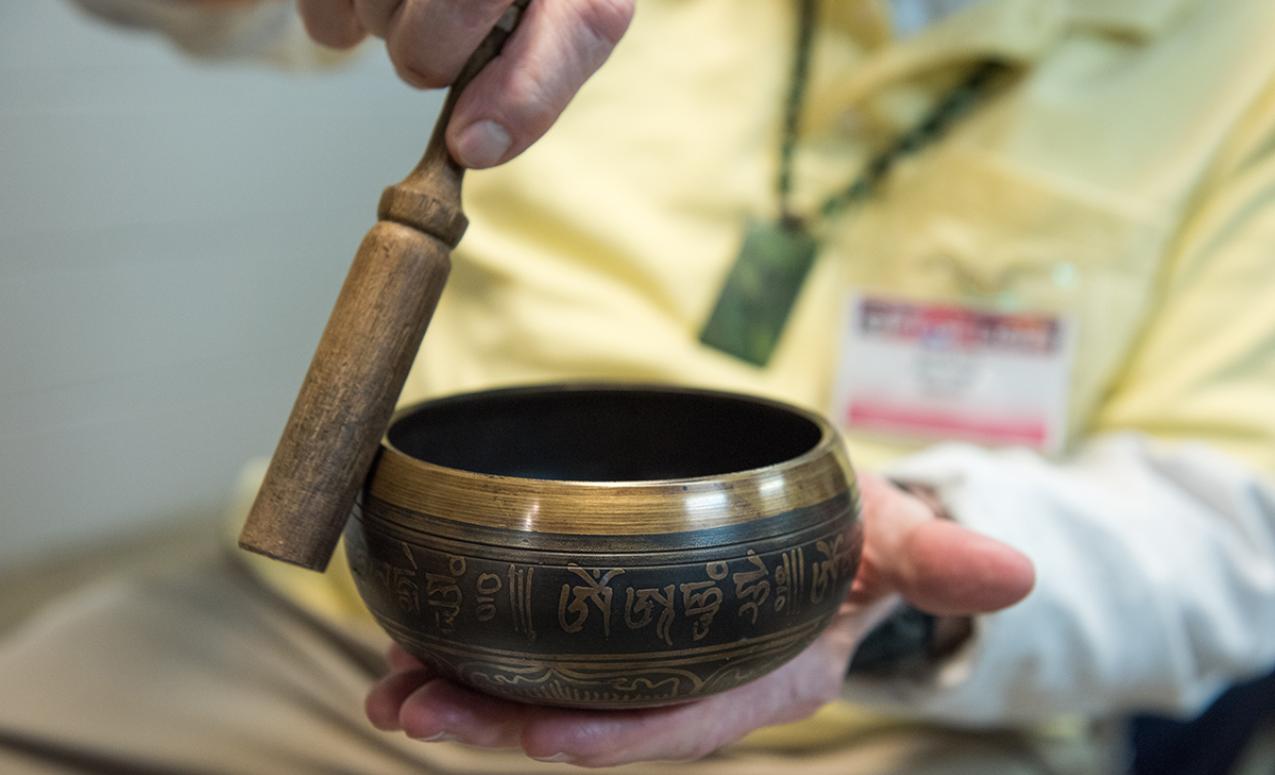 The Gift Of Light Expo is a semi-annual event in Columbus for psychics, healers and other new-age and nontraditional spiritual resources. It travels to other parts of Ohio and the Midwest as well. (Photograph by Jo McCulty)

Isaac Weiner, co-director of the American Religious Sounds Project (ARSP), hired Pond after learning about her work documenting the Wolford family and other faith communities. Weiner said he was impressed by the sensitivity of Pond's portrayal of the Wolfords, and how she did not judge their beliefs.

Today, Pond is busy recording new material for the ARSP and editing audio and photos for a website launching this spring.

The ARSP offers resources for both researchers and the general public to understand the diversity of American religious life through its “sonic cultures.”

“I like to put listeners into a space. Sound can transport you to a place in ways that visuals don’t always do,” Pond said.

For example, in her audio essay about trucker chapels, which assist truck drivers at travel centers nationwide, she tries to sonically recreate the experience of being a driver and visiting one of these places.

Sound is often a central part of religious practice, Pond has found.

She remembers an Eckankar seminar in Dublin, Ohio, shortly before she began her job at Ohio State. Eckankar adherents believe that humans are connected to God through a divine spirit, which can be “heard as sound and seen as light.” One of the cornerstones of their practices is the HU song, a chant that they believe brings them closer to God.

“About 50 disparate voices all chanting HU at their own pace, combined to form an encompassing, undulating melody,” she wrote for the ARSP blog.  “It had almost a three-dimensional quality to it.”

The ARSP doesn’t document just formal services, but looks for where the religious and secular intersect, Pond said. In one case, she documented an anti-Islam protest outside the Noor Islamic Cultural Center in Dublin, Ohio.

She describes editing as an intuitive process of finding the audio that will best connect with the listeners. She often makes short audio clips, from 30 seconds to 2 minutes long, highlighting the most interesting material.

Sound can transport you to a place.

In some cases, she will create audio essays — as she did with Eckankar — which include both ambient sounds and explanatory narration from participants. In other cases, such as her feature on trucker chapels, she creates audio collages with no narrative voices.

When the material is particularly rich, Pond develops curated digital exhibits, which integrate photos, audio and text. These exhibits will be one of the features of the new website.

Pond said her work photographing the Wolfords has changed the way she documents religious practices, including what she does at Ohio State.

“I don’t see myself as a traditional journalist anymore, who is supposed to be removed from the subject and totally objective,” she said.

“Instead, I try to be involved more with the people I’m documenting, to connect with them as fellow humans. I’m not participating in their rituals, but I’m part of their lives.” 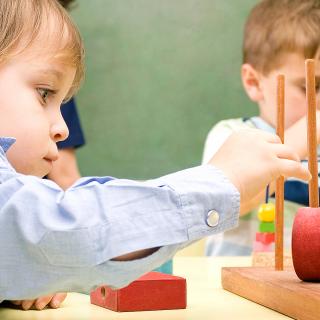 Click here to go to page.
Life and Society
Held back

Click here to go to page.
Life and Society
How the ABCs set up preschoolers for success 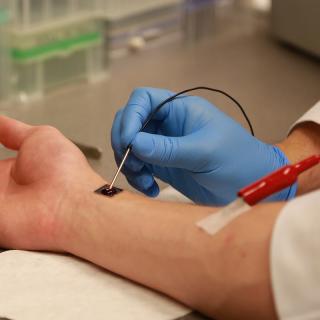