The tree’s iconic nut inspired two students to create the wildly popular mascot Brutus Buckeye in 1965, and who hasn’t found the sweet satisfaction of a buckeye recreated as the addictive chocolate and peanut butter treat?

If you want to add this piece of Ohio lore to your landscaping, take some advice from Paul Snyder, a program coordinator at Ohio State’s Secrest Arboretum, and Kathy Smith, a forestry program director in Ohio State’s School of Environment and Natural Resources.

Buckeye trees: not just for Ohio!

The Ohio buckeye, rated as a USDA zone 4 tree, is native to a wide range of states, from Pennsylvania in the east to Nebraska and Kansas in the west and down to Alabama, Snyder said. You can grow the tree outside its native range if conditions are right, although Snyder cautions it probably wouldn’t grow well in the deep South.

The buckeye buds early, which means late frosts can hurt the leaves and blooms. Despite this, the buckeye is fairly tolerant of cold. “There are people up in Michigan and Wisconsin that are growing it,” Snyder said.

Smith cautioned that you might want to do a little research to make sure buckeyes are welcome in your state. “Always you get alumni who want to grow them, and I think one of those states out (west) actually has it on their invasive plant list.”

Where to buy your buckeye tree

Some nurseries sell buckeyes, but you may have to order them online or from a catalog. Ohio buckeyes aren’t the most common, Smith said. She recommends looking for a nursery that focuses on native species.

If you’re going to start buckeyes from seed, you need to plant them as soon as you collect them, Snyder said. If they dry out, the embryo dies.

Can’t plant them right away? Put them in moist peat moss and refrigerate them. You also can plant the nuts in a container and let them sit through the winter until they sprout in the spring.

Snyder also suggests covering the plantings with quarter-inch hardware cloth fencing to keep chipmunks and squirrels from digging them up.

You can plant buckeyes in full sun, but since they are adapted to live in forest understory, Smith recommends giving them partial shade. Be aware that buckeyes can reach 40 to 60 feet in height, though, so you won’t want them in your flowerbed.

“Don’t put it up next to your house; put it in the back yard where it can grow and spread and do its thing,” Snyder said.

If space is an issue, he said smaller varieties such as bottlebrush or scarlet buckeyes are an option. “Scarlet buckeye is actually much more attractive in terms of its ornamental features, scarlet red flowers, shiny green leaves, great disease resistance.”

As for soil, Buckeyes are native to the banks of streams and forest floors. They do best in soils that are a silty clay loam, rich in organic matter, slightly acidic and moist but well drained.

They can grow in other conditions, but won’t do as well if soil is too dry, or very clay-based or sandy.

Caring for your tree

Like many trees, buckeyes are low-maintenance. Keep an eye on the young tree, and if it splits into more than one main shoot, prune it. Late winter is a good time for that.

The good news is buckeyes don’t have fatal diseases or invasive predators like those plaguing other trees — at least not yet.

It is common, however, for buckeyes to get a fungal disease that causes brown blotches on the leaves. There’s not much you can do about it, and it usually doesn’t cause permanent damage. In the course of a season, the blotches can eventually spread over the whole tree, which can give it a “scorched” look. The leaves then fall off early.

Ready to get started? Head over to Ohio State's College of Food, Agricultural and Environmental Science for more tips: 7 Things to Know About Growing an Ohio Buckeye Tree. 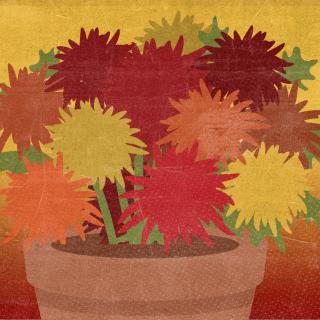 Click here to go to page.
Food and Agriculture
What to plant in the fall